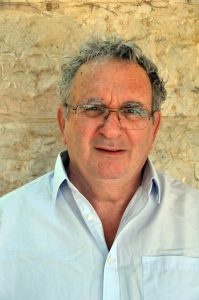 Benny Morris is one of Israel’s leading historians and public intellectuals. He was born in Israel in 1948 and was educated at the Hebrew University (BA) and Cambridge University (Ph.D.). He served in the IDF in infantry and paratroops. He was a journalist at The Jerusalem Post from 1978 to 1990 and was professor of Middle East history at Ben-Gurion University from 1997 to 2017. From 2015 to 2018, he was visiting Israel studies professor at Georgetown University. He has taught as a visiting professor at Harvard University, Munich University, the University of Maryland and Dartmouth College, and was a visiting fellow at the Brookings Institution.

Morris has published ten books on Middle East and European history, with a focus on the Arab-Zionist conflict. His books include “The Birth of the Palestinian Refugee Problem” (Cambridge University Press); “1948, A History of the First Arab-Israeli War” (Yale University Press); and “Righteous Victims, A History of the Arab-Zionist Conflict, 1882-1999” (Knopf).

Morris’ most recent book, co-authored with Prof. Dror Ze’evi, is “The Thirty-Year Genocide, Turkey’s Destruction of its Christian Minorities, 1894-1924” (Harvard University Press), published in April 2019. He is currently working on a biography of the (Jewish) master spy, Sidney Reilly. He has published articles in The New York Times, The Wall Street Journal, The New York Review of Books, The New Republic, The Guardian, Corriere della Sera, Liberation, Die Welt, and Haaretz.

The Revolution in Israeli Historiography
The shift in the 1980s-1990s from establishment, official Zionist historiography, mainly by those who participated in the 1948 war and the rise of Israel to the new generation that had lived through the 1973 Yom Kippur War, the 1982 invasion of Lebanon and the post-1967 occupation of the West Bank and Gaza. The “New Historiography” which superseded the “Old Historiography” has been more critical of Israel’s history and decision-making regarding peace or war with the Arabs, the Palestinian refugee problem, etc.
The Two tracks of Islamist Assault on and Threat to the West (and Israel), ISIS and Iran
Looks at the Islamist ideologies, actions and aims of the Islamist terrorist organizations, currently with ISIS most prominent, and at Iran, and weighs which is the more serious, potent threat.
A New Look at 1948
Looks at what new research on the first Arab-Israeli War has concluded, regarding the war aims of the Zionists\Israelis, the Palestinians and the participating Arab states; the nature of that war (conventionally seen as a political war between nationalist movements but today also seen as a Muslim jihadi enterprise, a religious war); the creation of the three refugee problems as a result of that war (Israelis, Palestinians and Jews from Arab countries); and the balance of forces between the various participants in that war (“David” and “Goliath”) – who in fact was stronger?
The Failed Israeli-Palestinian Peace Process and Camp David, 2000
Looks at the evolution of Israeli-Palestinian policies and negotiations since 1967, with a focus on the 1990s (the “Oslo Process”) and 2000 (“Camp David and the Second Intifada), and why the talks have gone nowhere and Israel remains in partial occupation of the West Bank and Gaza Strip and the Palestinians in semi-rebellion. Israeli or Palestinian “Rejectionism”?
The Two Refugee Problems
Looking at the why and how the Palestinian refugee problem (some 700,000 of them) arose in 1947-1949, and its aftermath, and how and why the Jews from Arab countries (some 800,000 of them) became refugees during 1947-1964 and what happened to them.