Michael Berenbaum is undoubtedly one of the most impressive, knowledgeable, and dynamic speakers about Holocaust topics in the world today. Berenbaum combines a wide-ranging knowledge of both the history of the Shoah, and the important philosophical issues and dilemmas which arose during that tragic period." 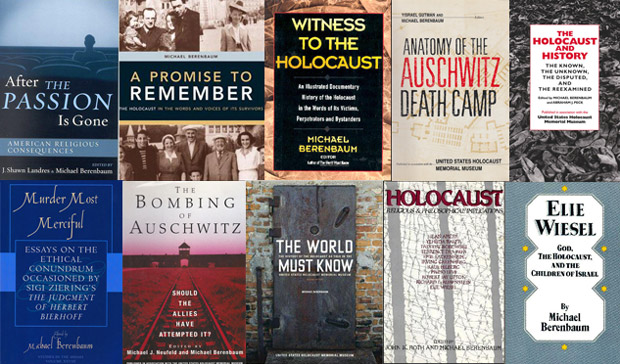 Praise for Berenbaum as Teacher:

"The wisdom I gained from his [Berenbaum’s] class is priceless. He is [was] young, aggressive, tough, wise as some sages of yore, and as brilliant as a diamond. When class ended, you felt filled, drained, and filled again."
— Pearl Bailey, Between You and Me

Praise for Berenbaum as Scholar:

"All those who want to read only one book about the condition of Jewry would do well to choose Michael Berenbaum… In his description of contemporary Jewish thought, he sacrifices neither complexity nor lucidity."
— Raul Hilberg, writing on After Tragedy and Triumph

“The World Must Know is a majestic and profoundly moving history of the Holocaust…It is must reading for anyone who would like to be human in the post Holocaust world."
— Charles Silberman

"The scholarship, broad and deep, makes this the definitive book on one of our century's defining horrors."
— The Village Voice on Anatomy of the Auschwitz Death Camp

Praise for Berenbaum as Speaker:

“Michael Berenbaum is undoubtedly one of the most impressive, knowledgeable, and dynamic speakers about Holocaust topics in the world today. Berenbaum combines a wide-ranging knowledge of both the history of the Shoah, and the important philosophical issues and dilemmas which arose during that tragic period. With his engaging speaking style Michael has helped educate both Jewish and non-Jewish audiences about the significance of the Holocaust and its many universal and particularistic lessons. Having shared podiums with him on numerous occasions, in various places around the world, I can attest to his rhetorical talents, and ability to perfectly suit his presentation to each and every audience.”
— Efraim Zuroff, Simon Wiesenthal Center, Jerusalem

“Michael Berenbaum directly and passionately addresses so many topics within Jewish history and politics. His insight is unique and his ability to deliver difficult information thorough and moving. He takes his watch off, begins with a story or joke and engages his audience from the start. He can focus on Holocaust, on Holocaust Education, on European antisemitism today, or teach a Biblical or Talmudic text and present with depth and compassion. We have brought him to Wilshire Boulevard Temple a number of times and his influence is felt. I look forward to his next lecture.”
— Rabbi Karen L. Fox, Wilshire Boulevard Temple