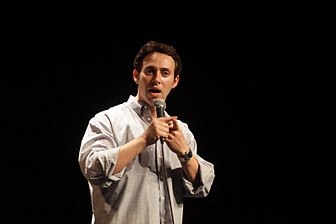 From Comedy Central to CBS’ Late Late Show with Craig Ferguson, Avi Liberman has been a hit with audiences around the country. Born in Israel, raised in Texas, and now living in Los Angeles, Avi’s winning combination of life experiences and topical issues have made him a favorite in comedy clubs from coast to coast.

Avi has performed stand-up comedy on Comedy Central’s “Premium Blend” and “Make Me Laugh” as well as NBC’s “Friday Night!” and three appearances on the Late Late Show. His acting credits include “Dave’s World” CBS, “Boston Common” NBC and “Andytown U.S.A.” Comedy Central. Avi can be seen regularly on E! as one of their frequent guests on their very popular countdown series. He has also guest starred on “Movies At Our House,” and a pilot titled “Through the Keyhole” on AMC. Avi has performed in synagogues, Federations, and Jewish Community Centers throughout North America

Avi has been overseas to Iraq and Afghanistan to perform for our troops. Since 2003, Avi has successfully arranged widely acclaimed stand-up comedy tours in Israel to help boost morale while donating all of the proceeds to a charity. The successful “Comedy For Koby” tour www.comedyforkoby.com is now a bi-annual event, benefitting the Koby Mandell Foundation.

Avi has also been one of the only people in the world who traveled extensively during Corona, actually performing in some of the most unique locations. He is currently writing a book about his travels which is close to being completed. He was the first Israeli citizen to perform in Dubai, as well as do an hour show in Moscow. Avi used Israel as a home base and traveled to 8 countries in 7 months.