Excerpts from reviews of Joel’s book, The 188th Crybaby Brigade…

“One of the funniest books you’ll ever read about the sometimes absurd alternative reality of the IDF.”
— Jerusalem Post

“Laugh-out-loud funny….I promise you that you will not think about your own Jewishness in quite the same way after you finish his smart, funny and provocative book.’
— Los Angeles Jewish Journal

“An unusual story, humorous but not without heartbreak, told well by an intelligent and gifted writer.”
— The Forwardja

“Chasnoff isn’t a writer who just happens to be Jewish. Indeed, his entire book examines his own Jewish experience, a very positive and loving one.”
— Chicago Jewish News 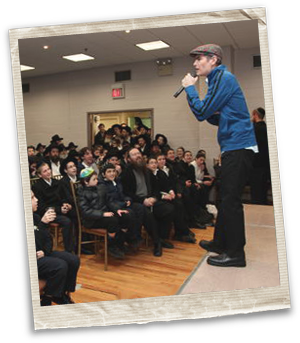 “While comics such as Chris Rock and Margaret Cho riff on their respective minority cultures, Chasnoff does the same about growing up Jewish.”
— Los Angeles Jewish Journal

“Chasnoff is a big hit with remarkable ability. His unique brand of Jewish humor is based on positive experiences of Jewish life.”
— The Forward

“I am impressed not only with the humor of Joel’s act, but also the source of his humor. One cannot help but recognize the value he places on the rich traditions of Judaism. It is very intelligent humor that brings audiences a deeper appreciation of what it means to be Jewish in a modern world.”
— Richard Joel, President, Yeshiva University

“Joel has the amazing ability to make us laugh while inspiring us at the same time. His keen understanding of what university age students find humorous together with the humor of those of us who are ‘seniors’ is extraordinary.”
— Marlene Post, Past President, Hadassah

“Joel managed to cross generation gaps with his humor that can only be described as incredible.”
— Barry Stein, Chabot Center of Sarasota, FL

“The sanctuary of the synagogue rang with laughter. People were wiping tears from their eyes. I received a few complaints from some that they almost lost control of their bladders.”
— Maggie Miller, Director of Adult Learning, Colorado Agency for Jewish Education

“Attendees were raving about Joel and saying that he was the best comic they had heard in years.”
— Bari Elias, YLD Director, United Jewish Fund and Council of St. Paul, MN

“It is so tiresome and sad to hear Jewish comedians who are disconnected from the Jewish soul; their humor reflects their own discomfort about being Jewish. Joel’s humor, meanwhile, is wonderfully informed by his knowledge of Jewish life and Judaism. When we laugh, we laugh at ourselves but we feel GOOD about it because we know that Joel feels good about it, too. It was refreshing to enjoy Joel’s humor and your stories, without sleaze, without hard language.”
— Judy Kupchan, Board of Jewish Education of Metropolitan Chicago

“I looked around the room and saw 200 people laughing out loud at themselves, their families and the joys that come with being Jewish.”
— Ellen Feigen-Kiefer, Congregation Beth Emek, Pleasanton, CA

“You hit the mark in every respect and showed our teens that Judaism is hip and cool. You infused them with pride in their Jewish education and traditions.”
— Sahara Oz, Coordinator, Teen Education and Israel Trips, Jewish Community Federation of Rochester

“Joel’s performance was outstanding and had everyone on our staff laughing hysterically until tears were streaming down their faces!”
— Kerith Braunfeld, Associate Director, Rodeph Sholom Religious School

“We loved every minute. Our cheeks hurt from laughing! Joel’s brand of humor was positive and refreshing.”
— Barbara Nazimov, Campaign Coordinator, Jewish Federation of Reading, PA

“As I sat in the audience with young children, teens, and a few alte-cockers around me, everyone was laughing! Joel is a fresh young face for the growing insurgence of today’s practicing Jews. Move over Borscht Belt comedians and welcome Joel Chasnoff.”
— Diane Kobi, Social Action Coordinator, Stephen S. Wise Temple, Los Angeles, CA

“People were laughing so hard, they were wiping the tears from their eyes.”
— Sylvia Berman-Peck, Senior Director of Development, Jewish Federation of Metropolitan Chicago

“It’s wonderful to find a comedian who knows how to be funny without being inappropriate. Your strong background in and passion for Judaism really make you a great role model for students.”
— Jessica B., Youth Activities Director, Temple Emanuel, Newton Centre, MA

“Joel’s strengths are the two critical ones: his material is strong and his presentation is equal to that.”
— Rabbi William Rudolph, Congregation Beth El of Montgomery County, Bethesda, MD

“I can’t remember when I got so many compliments for a campaign event. One person said her smile muscle ached because she laughed so much.”
— Gloria Schwartz, Executive Director, Jewish Federation, Springfield, IL

“Joel’s great humor, easy-going nature, and love of Judaism and Israel all came shining through. And the tremendous amount of laughter and joy that filled our sanctuary helped create a special night that the community will not soon forget.”
— Rabbi Sidney Helbraun, Temple Beth El, Northbrook, IL

Joel’s humor was timely, incisive, and intelligent—delivered with a delightful charm and insight. He appealed to all levels of the audience from the 20-somethings, to those of us in the over-the-hill crowd—and everyone in between.”
— Barbara Berry, President, Aha Dance Theatre, Kansas City, MO

“An elite member of the field, Joel combines Jewish and secular subjects and brilliantly finds hilarity where few have discovered adequate material.”
— Jonah K., The Hillel House and Boston University

“As a people, we have always been able to laugh; you showed our teens that we could laugh at ourselves with pride and appreciation for who we are.”
— Joan Hersch, Education Director, Congregation Brothers of Israel, Trenton, NJ

“WOW! Joel was every very bit as great as I had hoped and he helped us create a huge success for our Comedy Night earlier this month.”
— Betsy Dobrick, Program Director, Congregation Bnai Israel, Boca Raton, FL

“Joel was hilarious, and his timing was impeccable. The campus is still talking about how much they loved Joel’s performance.”
— Courtney W., Student Event Coordinator, University of Wisconsin-La Crosse

“Chasnoff does for the IDF What O’Brien did for the war in Vietnam.”
– Anthony Swofford, New York Times, bestselling author of Jarhead